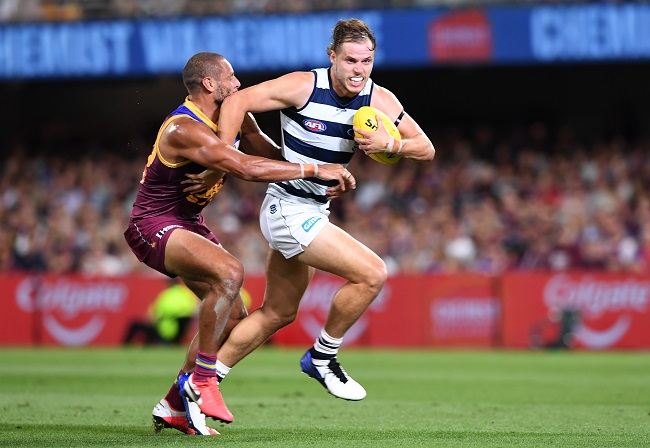 Geelong defender Jake Kolodjashnij has thrown his support behind Tasmania's bid for an AFL club, saying the thirst is there for a team to thrive.

Debate is still raging as to whether the AFL should expand to 19 clubs in order to get a team in Tasmania.

The Tasmanian government's plans for a $750 million stadium on Hobart's waterfront also remain up in the air, with questions about who will fund the project.

The AFL wants the Tasmanian government to fund the majority of the stadium, but Tasmanian premier Jeremy Rockliff says his government isn't willing to pay more than half of the bill.

Kolodjashnij, who was born in Tasmania, said the huge support thrown behind NBL newcomers Tasmania JackJumpers last season was further proof of the hunger for sport in the state.

If all goes smoothly, a Tasmanian AFL team could be in place by 2026.

"I'm all for it," Kolodjashnij said.

"Being a Tassie boy and knowing it's the main sport down there, everyone gets around it.

"What they've seen with the JackJumpers and how their season has played out, I think if it is to go ahead, I think the community down there will really jump on board.

"It would be a great thing for the state long term if it was to go ahead."

Kolodjashnij will notch his 150-game milestone in Saturday night's clash with St Kilda at GMHBA Stadium.

The ladder-leading Cats (15-4) are on a 10-match winning streak, but Kolodjashnij doesn't subscribe to the theory that Geelong would be well served by having a complacency-busting loss before the finals.

"You want to play your best footy at this time of the year, so I'm happy to keep banking wins," he said.

"It's a good feeling singing the song every week.

"The main focus of the group is to try to sharpen different areas as best as we can to put our best foot forward come September."