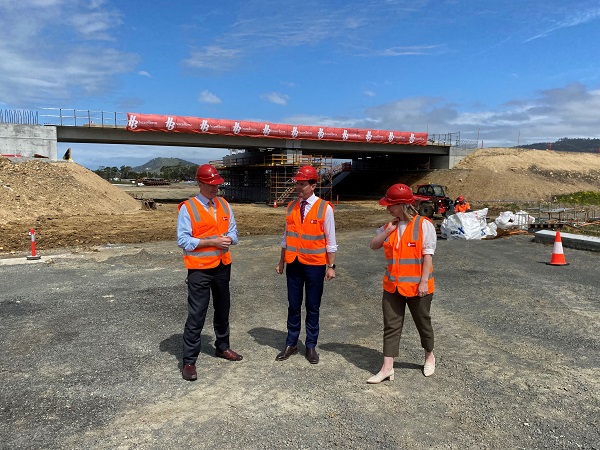 The installation of concrete bridge girders for an overpass in the Hobart Airport Interchange project are being celebrated by state and federal governments.

The bridge spanning 44 metres will lift the Tasman Highway clear of the intersections of Kennedy Drive and Holyman Avenue.

With a rapidly expanding population in the Sorell region and current Highway congestion near the airport, Liberal Senator Jonathon Duniam describes it as an investment in the future.

"A project which has seen nearly 50 locals employed in its construction, it's a great projectwhich is going to make driving through here much quicker, much safer and it's going to future proof this region."

Tasmanian Minister for Infrastructure and Transport, Michael Ferguson said the project is being delivered by Tasmanian company Hazell Bros with the bridge girders supplied by another local company, VEC Civil Engineering which is fantastic for our State.

“The Tasman Highway between Sorell and the city of Hobart is one of Tasmania’s most important transport corridors,” Minister Ferguson said.

“It is a major conduit for freight and an increasingly important commuter route between Hobart and the rapidly expanding residential areas of Sorell and the Southern Beaches.”

The girders will support a poured concrete deck that provides two lanes of traffic in each direction. Installation of the girders is expected to be completed by next week and the interchange is on track for completion in 2022.